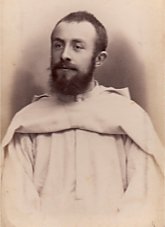 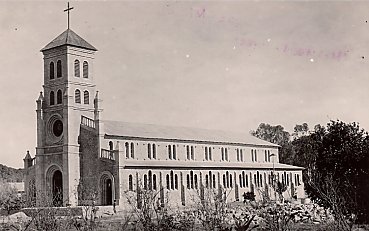 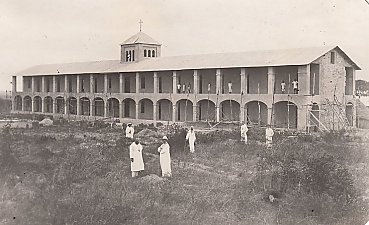 Brother Mathieu, born in Belgium in 1871, was appointed to Unyanyembe (now Tabora) immediately after his novitiate (at the time, the territory was part of the German colony of Tanganyika now Tanzania). He arrived in 1894 at the age of twenty-three. Like many of the early builders, he had had little basic training and learnt his construction skills on the job by trial and error. Having built a church at Buhongo in Burundi, he returned to the Bishop’s residence at Ushirombo to help a senior Brother build a church there. Building with mud bricks was still a new experience and, perhaps overestimating the strength of the blocks, a wall collapsed causing fatal casualties. Brother Mathieu was so upset he had to return to Europe to recover. However, after a few months he was back and resumed his building work at the mission of Mbulu, in the north east of the country.

There was an added difficulty at this foundation. On their arrival, the missionaries were not welcome and it was impossible to employ local labour. To provide meat, Mathieu had to take his gun and go hunting in the bush. Later the mission became a thriving Christian community and this was due in part to Mathieu’s influence. The first Christian was a man who was so impressed by the Brother’s skill that he volunteered to come and work for him. From time to time, they spoke of religion and Joseph became a catechumen. Two of his children entered religious life, a son became a priest, and a daughter was one of the first women to join the Congregation of the Daughters of Mary.

Building of the Major Seminary of Kipalapala

After two years, Brother Matthew moved on. In 1913, he was building a house in Tabora for the newly appointed Bishop, Henri Léonard (+1953), who had decided to transfer his place of residence from Ushirombo. Leipert, a German army engineer, drew up a plan. The new building was to have twenty rooms on two floors with a veranda at the front and back. It would be the largest building in Tabora apart from the Boma (enclosed compound containing the district government offices).

By the middle of April all the materials had been collected, including five hundred barrels of cement, and work began. Brother Mathieu, assisted by Brother Timothée (Guillaume Huybrechts, +1945), directed the work undertaken by twenty craftsmen who were paid 1½ rupees a day. Sixty day-labourers were employed. The cost of the building was estimated at sixty thousand rupees – some twenty thousand dollars. With stone foundations, concrete pillars, a solid wood frame for the roof with heavy corrugated iron, it was a solid construction indeed. By the middle of October, the house was complete except for the whitewashing of the rooms. When all was ready, on the feast of All Saints, November 1st 1913, Bishop Léonard blessed the house. After this work, Brother Mathieu left for North Africa for les grands exercices, the thirty-day retreat, and a good rest. While there, the First World War broke out and his return was delayed until 1919.

The Cathedral church in Tabora

The Vicariate was developing and much building was needed. Bro. Mathieu built a junior seminary at Itaga, the senior seminary at Kipalapala, Fathers’ houses at Ndala and Usongo and several convents for Sisters. A new cathedral had to be built at Tabora so first, as a trial, using local stone; Brother Mathieu built a large Church at Usongo.
The Cathedral at Tabora was his largest construction. Digging the foundations began on the 1st June 1933 for a Church measuring 53 metres by 17. It was completed with a bell tower, twenty metres high proudly piercing the sky. It dominated the little round huts surrounding it in the town. A letter of Fr. Léon Bourget described the blessing by Bishop Guillaume Trudel (+1968) on 4th March 1934.

“In attendance was a crowd of Christians, many from neighbouring missions and joined by a long procession of junior and senior seminarians. All were entertained by the brass band of the Junior Seminary. The first High Mass was sung by the venerable Father Joseph Schmitt, (+1953) one of the first missionaries of the Tabora mission, celebrating his golden jubilee as a priest. We heard the ninety seminarians of St Paul’s Kipalapala sing Gregorian chant to perfection. The parish priest told the Christians about the house of Emmanuel, of our God who is happy to live among his human children, the house where they receive life for their souls in baptism, and grace in which to grow. He praised our dear Brothers for having built so well. “Ah, how times have changed,” he said. “In the beginning we were despised by the inhabitants of this Moslem city. I can still hear the voice of a woman crying to her son, Mabrouki, let us run away. Here comes an mfaransa (a Frenchman). It seemed as if we could do no good in the proud and disdainful milieu of Tabora.

Today, we see the residence of a Vicar Apostolic, a large and beautiful Church, a thriving Christian community, and Catholic schools full of promise for the future. How marvellous the change is. The schools contain the sons of those same Moslems who had thought they would dishonour themselves by greeting us. On this ancient slave market has risen the Cross of the Redeemer who by his sacrifice has ransomed us all.” In the afternoon, at benediction, the silvery voices of the pupils of the junior seminary of Itaga rose above those of their elders, filling with admiration the old bush missionaries so little accustomed to such harmony.”

The house in Kipalapala, building in progress

Brother Mathieu was always on the move. On his bio-notes, one can count 32 different appointments. He built the church at Lububu. His final work was at Ndono in 1943. By then he was old and ill. He is still remembered sitting on a chair in the midst of the work giving directions to his workers. Before it was complete, he retired to Tabora, suffering from cancer. Failing to rise on the morning of January 1, 1944, a confrere found him in his room very ill. “How are you, mzee?” he asked. “I think that I shall soon make a great safari,” he replied. “Today, if the good God wills.” These were his last words. All day long, Christians came to pray near his body.

Brother Mathieu did immense work, building Churches for the celebration of the liturgy, parish houses for his fellow missionaries, convents for the Sisters, schools for the children and dispensaries for the sick. His skills were not only as a builder; he was also a carpenter, blacksmith, mechanic, and gardener. Always cheerful and communicative, he was an asset in community. Mathieu was a burly man, enormously strong. People still relate how, one day, a worker falling from high up on some scaffolding was caught safely in the arms of Brother Mathieu. Fifty years after he built Kipalapala seminary, an old man related admiringly how he could pick up several boys with one arm. His buildings are a monument to his work but he was much more than a material worker.

When he took his vows (as Brothers did at that time), he promised to devote himself to the spiritual and temporal welfare of the people of Africa. His working life was imbued with a missionary spirit, giving an example of Christianity in action. Everywhere he made a great impression on his workers and the local people. For decades after he had worked in a mission, visiting Fathers were asked for news of him. Fr. Pierre Verhoeven (+1959) related how thirty years after he had completed the work at Mbulu, people told him how Brother Mathieu had taught many the skills of carpentry, welding, brick making and building and was always patient with mistakes, gentle and tactful. The greatest tribute said of him was that “he loved us.”