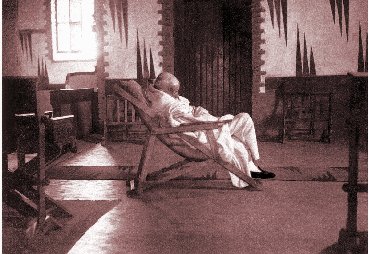 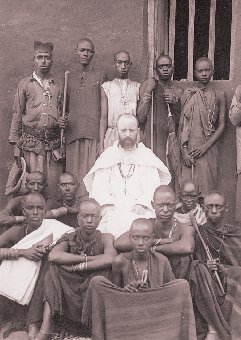 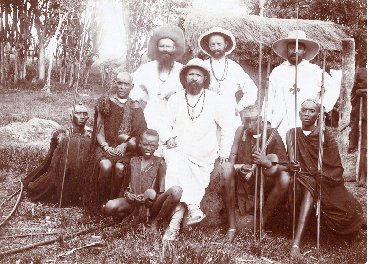 Do you see this beautiful photograph? A very old Missionary of Africa sleeps in front of the tabernacle of the church at Muyaga in Burundi. He is Fr. Jean LEPORT, that is his real name, and at the end of his life, he was very sick. The doctors in Bujumbura had diagnosed a stomach cancer that was inoperable. He was 87 years old. Piripori, as he was known then, had asked to return to Muyaga to die among his own people. On the 14th September 1964, he fell asleep in the Lord after 61 years in Burundi.

Who was the man of whom it was said, “Piripori? ni we yatanguye Uburundi” (Fr. Leport, it was he who created Burundi). Naturally it was not the Burundi of the ancestors of Mwezi Gisabo, but the Christian Burundi, yes! And to what extent!

I would like to introduce you to this wonderful missionary personality because he was a model of a zealous and enlightened missionary. He was a man of prayer and action, resolute and courageous.

Today, we might find it difficult to believe that Muyaga was not always the place it is now. Think about it. In 1900, two years after its foundation, Muyaga had 16 Christians. This had grown to 208 in 1908 and to 457 in 1910. The beginnings were very slow and difficult mainly because there was a lot of mistrust.

In the beginning, the Fathers of Muyaga spent a lot of time installing and equipping the mission post. They were not very sure of what to make of the people around them. Piripori thought that they had to go out, go around, and meet the people.

A providential visit: 10 years after its foundation, in 1908, an emissary from the Superior General of the White Fathers in Algiers, a Fr. Malet, came to visit the missionaries. He gave them a lot of advice. He told them, inter alia, what Piripori was thinking and was saying under his breath; “go out, get around, contact the people.” From that moment and with the blessing of his superiors, Piripori launched himself into the apostolate around the parish. He went out to meet people there where they lived, grouped in fertile hilly lands on the side of the great mountain ranges like the Birime. The fathers founded and increased the outstations and entrusted them to more educated and enlightened Christians. These Christians, well trained and visited regularly, would become the catechists of the future. This was something new and it went on to develop in a remarkable way. In the beginning, it was just a handful of people, living near the mission, then a legion of devoted Christians, close to the Missionaries and to the people. These catechists would become the great artisans of the evangelisation of Burundi. Piripori was right. He got his confreres involved in this plan and the catechumenate was organised. From Muyaga, with daring and confidence, Piripori placed his men in out of the way places, which later became the parishes of Gitwenge, Gisuru, and Rusengo. Piripori was very demanding of his catechists. They came often to the central mission to receive concrete instructions, how to prepare lessons, as well as advice and encouragement. At these meetings, the catechists recounted their experiences, their joys and their sorrows. A veritable school for catechists was born. Fr. Laport took the gamble of sending the most promising of them to the four corners of Burundi. Think then of Makamba, Gatara, Busiga, Mpinga, Rusengo and even to the neighbouring Buha (in Tanzania?) to help evangelisation which was just beginning there. One remembers particularly one of those catechists sent on mission, the father of Archbishop Joachim Ruhuna (assassinated in 1996), who came and settled in the region of Nyabikere-Gatonde. These valiant apostles were good fathers of families and the Lord knew very well where to go to look for his first priests.

Piripori as a true missionary did wait too long before communicating his deep inner conviction to the people of Burundi. He cared a lot about education and he looked to the future. He knew how to discern, to choose well and he spent a lot of time in training people. He published a manual, a simple catechism, in 1920. He knew the language very well and his superior, Fr. François Ménard (+1927), the author of the first grammar, helped him a lot.

Without seeming to be doing it, Piripori began a primary school, which was not called that at the time. To prepare his catechists, he invented a school. Young people, from 12 to 15 years, received elementary instruction: reading, writing and arithmetic as well as a religious formation. This application of observation and experiment gave good results. It gave a solid formation to many of the catechists, schoolteachers, local chiefs and under chiefs. However, he did not stop there; he was thinking further ahead and thinking along the lines of junior and major seminaries. The most promising students he sent, if they wished, to Ushirombo in Tanzania and later on to Kabgayi before the opening of the junior seminary of Muyagi. In this latter seminary, most of the students came from the Muyagi area. In 1925, Piripori imposed his hands on the two first priests of Burundi. They were from Muyagi.

In the course of his apostolic journeys, Piripori met Chief Kiraranganya in the region of Gisuru. Cardinal Lavigerie had told his missionaries: visit the heads, the chiefs. Their conversion would mean that their subjects would follow. Without doubt, Lavigerie was thinking about the Baptism of Clovis, which brought about the conversion of the Franks. On the 24th March 1918, Joseph Kiraranganya was baptised. Slowly the ruling class budged and began to show an interest in the religion of Jesus Christ. Piripori organised the catechumenate, which welcomed more and more neophytes and catechumens. The result was a huge expansion of the Church in Burundi. The outstations played a very important part in this expansion. In 1927, the Church in Burundi officially adopted the model of the catechumenate already tested by Piripori. In 1915, there were 457 baptised, in 1922, 5,552. In 1943, the year when Fr. Leport retired from his responsibilities as superior after 40 years, Muyaga had 28,500 Christians and Rusengo, erected as a separate parish from Muyaga in 1923, had 19,188 Christians.

What was the secret of all this successful growth? One has only to look at the deep faith of Piripori who was always a man of prayer. He was very faithful to the community life model of the White Fathers that give a prominent place to prayer. In his mission, prayer was the norm. The Bishop willingly entrusted young confreres to Fr. Leport in order that they got a good initiation into the language and the mission. I was one of those from 1955 to 1956. All those who passed through Muyaga have kept a great affection and admiration for Piripori.

Piripori introduced the Eucharist Crusade (now MEJ) to Burundi. He had a great devotion to the Eucharist. He prayed a lot even at night before the tabernacle. It was not surprising that at the end of his life, he asked to be put in the choir of the Church of Muyaga to pray, in fact, he slept. However as the psalm says, “All this God gives to his beloved in sleep” (Ps. 127). He had the right to sleep before the Lord whom he had so generously made known and loved by the Burundians. He was 61 years in Burundi and took only two holidays in Europe; in 1923, he did his Long Retreat in Algiers and in 1952; he went home for a few months. In June 1963, he celebrated 60 years of priesthood. He was still in good health and on the evening of the feast, he brought together all the old catechists and former servants of the mission. In June 1964, he spent some time in hospital in Bujumbura. However, nothing could be done for him and he returned to Muyaga to die among his own people as he said. Two days before he died, he said his farewells to all those surrounding him. The priests of Burundi demanded that his body rest in the Church of Muyaga in a small side chapel opposite to where one finds, today, the original cross of Misugi.

What a beautiful life! He was often called the holy Fr. Leport. However, do not believe that you would be bored in his company. He was cheerful, he laughed easily and could make people laugh. He liked to tease and enjoyed being teased himself. The Lord blessed his apostolic work. As for me, the writer of these lines, I can only say, “Thank you, thank you, Piripori. You have been a faithful servant of God and a great apostle of Burundi.”