At the Generalate - Roma - Au Généralat 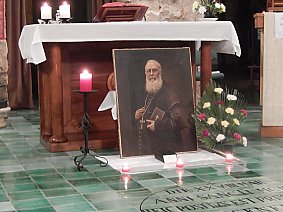 The most important date kept in the memory of Lavigerie Family

In our Lavigerie Family, this day is the most remembered in the life history of our Founder. We commemorate it every year. This is not the case with the other important dates in his life, for example, his birthday or his episcopal ordination or his arrival for the first time in Africa (Algeria), etc. Special celebrations were held to mark the centenary of his birth in 1925 (cf. his statue at Notre Dame d'Afrique in Algiers, consecration of Lubaga Cathedral, etc.) but rarely remembered annually.
Professor John Mbiti, speaking about the 'dead' in the African beliefs, says that for the Africans, 'the dead are not dead, they are living-dead'! Cardinal Lavigerie the African, (somewhere he calls himself an African), is a living-dead and may be that is why we need his name and the year of his death to be able to open our 'intranet'!

But who are the people asking this question?
They are the lay people, bishops, religious and clergy mostly in areas where the Missionaries of Africa were the pioneer evangelizers, and are considered to be the ancestors in the faith of these local Churches. But also, a number of spiritual daughters and sons of Lavigerie, especially among the young generation are also asking this same question.

And why are people asking this question?
Is it just to get miracles through the intercession of Cardinal Lavigerie? I don't think so. I think there are at least two reasons behind this question: First, those who ask it consider the act of canonisation as a sign of recognition and thanksgiving for the work that Cardinal Lavigerie himself did for Africa. Secondly, these people discover in Lavigerie human and spiritual values and qualities which are worthy of being imitated and which through the act of canonization would be exposed to more light for people to know them and imitate them. These people seem to fear that without canonisation, this human and spiritual heritage for Africa and for the whole of humanity in general will be lost!

One could argue that the spiritual sons and daughters of Lavigerie, you and me, are the incarnation and the visible signs of this heritage and therefore there is no need for his canonization! But, in fact, the question, "why is Lavigerie is not yet canonised" addressed to his spiritual sons and daughters, could indirectly carry a message for us that we do not really reflect the 'Lavigerie' these people read about in the historical books, the Lavigerie who is a churchman, prophet and missionary as portrayed, for example, in the book of our confrere, François Renault.

This question, therefore, is food for thought for each one of us as individuals and as a Society! And on this day, we may ask ourselves whether we really incarnate and make visible the life and spirit our Founder.

Signs of hope in the wind of change (cf. Readings of the day)
The readings of today (Daniel 2:31-45; Lk 21:5-11) speak about wars and destructions! They speak about a strong wind of change in society and creation; changes of power, one kingdom comes another one goes, one creation comes, another one goes etc..
The first reading speaks of a great statue of extreme brightness which is hit by a mysterious stone and broken to pieces. Then the mysterious stone that struck the statue grows into a great mountain, filling the whole world.
In the gospel, Jesus speaks of the future complete destruction of the temple. Then he speaks of wars and revolutions, nation fighting against nation, and kingdom against kingdom, great earthquakes, plagues, famines, terrifying events and great signs from heaven.

Flashes of hope in the midst of chaos and destruction
However, in the midst of all these chaotic changes and destructions, the readings give some flashes of hope. In the first reading, we are told that there is a wind which comes and blows away all the broken pieces of the statue, leaving not a single trace behind. Then Daniel promises that the "God of heaven will set up a kingdom which will never be destroyed, and this kingdom will not pass into the hands of another race: it will shatter and absorb all the previous kingdoms and itself last forever." And in the Gospel, Jesus tells his listeners that: "...when you hear of wars and revolutions, do not be terrified, for this is something that must happen first, but the end will not come at once."

During the time of Lavigerie, there were winds of changes with threats of destructions both in the Church and in Society in general: For example the wind of modernism that put in opposition reason and faith, the conflicting relationship between Church and State (religion and politics), Vatican I and the question of the infallibility of the Pope, the Eastern rites and Missions, the internationalization of the Roman Curia, etc. Like Daniel and Jesus, Lavigerie not only pointed out at 'the signs of hope' in the midst of these stormy waters, but he also personally got involved in view of putting some flesh on those hopes. His antislavery campaign which we have been commemorating this year is just one of the many examples of this.

Changes in the world and in the Church today
Today, everybody is talking about the wind of global change within the Church and in the World. Today, there is no way that one can think and talk about Mission without taking into consideration these changes, for better or for worse. Thus, in our Plenary Council in Ougadougou, our theme was: Listening to the Spirit: Missionaries with Jesus in a changing world. The New Ecumenical Mission Statement, officially launched during the last WCC General Assembly in Busan is entitled: Together Towards Life. Mission and Evangelism in changing landscapes. Within the Catholic Church, everybody is talking about the 'wind of change' brought about by the election of Pope Francis, and many are eagerly waiting for the 'reforms' that this wind is going to bring about. And, the question on the lips of many is whether, this wind of change, will be like the wind we heard of in the first reading 'blowing away all the broken pieces of the statue, leaving not a single trace behind'.

In the footsteps of Lavigerie
In the midst of social, political and religious changing landscapes of his time, our Founder was at the forefront not only theoretically discerning the 'signs of hope', but also by practically getting himself involved. He stood by the Pope and the Church in spite the fact that he had some reservations on some key issues, for example, the ecclesiastical policy of government. Are we going to follow in his footsteps in the midst of this wind of change we witness today and stand by Pope Francis and the Church?

Cardinal Lavigerie, the African, is not dead! He is a living-dead in our midst! May he, as we need him to open our 'intranet', help us through his intercession, to enter wholeheartedly and courageously into the changes within the Church and in the world, so that we may be able to discern the signs of hope and eventually become 'blood, flesh and bones' of these hopes for our fellow pilgrims encountered on our daily human and missionary journey.